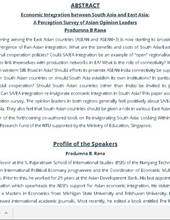 This presentation is based on a chapter of the forthcoming co-authored book on Re-invigorating South Asia: Looking Within, Looking East, and Looking West. This research is supported by the Academic Research Fund of the NTU supported by the Ministry of Education, Singapore.

Profile of the Speakers
Pradumna B. Rana

Dr. Pradumna B. Rana is Associate Professor at the S. Rajaratnam School of International Studies (RSIS) of the Nanyang Technological University (NTU). He is also the Coordinator of the Master of Science in International Political Economy programme and the Coordinator of Economic Multilateralism and Regionalism Studies at RSIS’s Centre for Multilateralism Studies. Prior to this, he worked for 25 years at the Asian Development Bank. His last appointment at the ADB was Senior Director of the Office of Regional Economic Integration which spearheads the ADB’s support for Asian economic integration. He obtained his PhD from Vanderbilt University where he was a Fulbright Scholar and a Masters in Economics from Michigan State University and Tribhuvan University. He has authored/edited 15 books, and published over 50 articles in peer-reviewed international academic journals. Most recently, he edited a book entitled The Renaissance of Asia: Evolving Economic Relations between South Asia and East Asia (World Scientific Publishers) and co-authored a book on South Asia: Rising to the Challenge of Globalization (World Scientific Publishers). He also co-edited books on Pan-Asian Integration: Linking East and South Asia (Palgrave Macmillan) and National Strategies for Regional Integration: South and East Asian Case Studies (Anthem Press, UK).

Professor (Dr.) Amita Batra is Professor of Economics in the Centre for South Asian Studies, School of International Studies, Jawaharlal Nehru University (JNU), New Delhi. Prof. Batra has been the first holder of the Professorial Chair (ICCR) in Contemporary Indian Studies at the Centre for South Asian Studies & Edinburgh-India Institute, University of Edinburgh during January – May 2013. In 2008, Prof. Batra was a visiting professor at the Indian Institute of Management (IIM)-Ahmedabad where she taught a course on ‘Global Economic and Political Environment’. She has worked extensively in the area of regional economic and financial integration with a special focus on Asia and her most recent Book on the subject is titled ‘Regional Economic Integration in South Asia: trapped in Conflict?’ (London: Routledge, 2013).  She also has to her credit two other books – Preferential Trading Agreements in Asia: Towards an Asian Economic Community (ed., 2008) and India and the Asian Corridor (Co-authored, 2007) and several research papers published in national and international refereed and other journals, books etc. Dr. Batra is a M.A., M.Phil., Ph. D. in Economics from the Delhi School of Economics, University of Delhi, India.